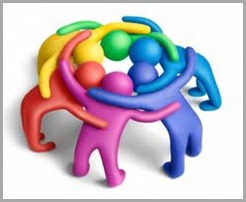 “Every individual has a place to fill in the world and is important in some respect whether he chooses to be so or not.”
Nathaniel Hawthorne

Community. Where have you discovered community, online or otherwise, in 2010? What community would you like to join, create or more deeply connect with in 2011?

While new to the whole blogging community in 2010 I was not new to the online community experience. Prior to 2010 I had originally discovered these  little niches  to be quite supportive. In 2008 I was diagnosed with endometriosis, which most people don’t know much about and don’t even know someone that has it and may have never even heard about it. It’s a difficult disease to understand so it was wonderful to find people who actually knew what I was talking about and understood what I was going through. I again sought out an online support community when I found out my daughter was diagnosed with diabetes. Here I found Children with Diabetes (CWD) which has since been my saving grace and sanity at times. Again the parents here got it and while I no longer participate in the endometriosis groups I am still very active in the diabetes communities. Both of which have resulted in some very good real life friends.

That being said I had never really though about an online weightloss community or blogging period for that matter. In July of this year Heidi and I were talking and she introduced me to Jen’s blog over at Prior Fat Girl. She also suggested we start a co-blog together to help hold ourselves accountable and give some support in our goals to have healthier lives. While it seems that it may not have been the thing for Heidi (who knows maybe she will come back to join us at a later point in time) I fell right in step and loved the blogging family I had found. Everyone (well most) is so supportive. We are all working towards the same common goal of finding a healthier self. There is defiantly a difference between bloggers and blog readers for sure. Being a blogger is allot of work if you want actual traffic and an up to date blog…but your blog is your own and you can run it like you want, update when you want, say what you want so in the end its only as much work as you want it to be.

For 2011 I want to continue on in the communities I participate in now but I also want to start  participating more in my school community. I don’t mean just by going to class and doing my homework, I want to get involved in the activities that go on on campus as well as some of the service opportunities.