“Life isn't about finding yourself. Life is about creating yourself.”
George Bernard Shaw 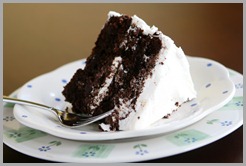 December 6 – Make. What was the last thing you made? What materials did you use? Is there something you want to make, but you need to clear some time for it?

For those of you who don’t know my daughter on top of having diabetes also has Celiac which is a wheat/gluten allergy. So for thanksgiving this year I decided to make a gluten free (GF)cake to take so that she could have dessert with everyone else. I also made gluten free sausage balls but the cake was the big attempt. GF sweets are usually pretty good and go unnoticed by even the non GF people and just pass as yummy. So off I go to make this cake forgetting that GF breads don’t rise like normal breads. This was my first problem…so off I go mixing up the cake, flowering the pan and splitting it into two round cake pans like I would normally do. Because it dosent rise I ended up with two cake layers that looked more like a thick pancake. This simply would not do! Yes I could have iced those bad boys and just took a short looking cake but I had my Dad’s cakes to live up to. A cake was always what he brought and being the first Thanksgiving without him I felt the need to fill this space. So I had to get creative

I also had a brownie mix in the cabinet that I decided to whip up last minuet so I could get some normal height out of my cake!  It still looked a little funny in the end but tasted pretty yummy (the brownie mix was a turtle one with caramel). Two chocolate cake layers with a turtle brownie layer in the middle and cream cheese icing…YUMMO!

The lesson here… first remember when baking GF goodies, they DO NOT  rise haha…second a little frosting can make anything look pretty

Another thing that I made in 2010 was an art journal. If your not quite sure what an art journal is basicly its still just a journal except that you want to make sure you get one with some study paper so that it can take whatever you put in it. Instead of just writing, you create! There is no right or wrong, its just an artistic outlet that you may or may not choose to share. You can stamp, draw, paint, cut, past…whatever inspires you. And if you don’t like it guess what you can cover the page and start all over again.

My Aunt actually got both my daughter and myself into this after my Father passed away and it turned out to be one of the most therapeutic tools to help get all those emotions out. She blogs about hers often over at Unwritten among other amazing things she creates. I hope to do more of this in 2011 among some other creative things. (If you want to try this these moleskin journals work great and Barnes and noble sells them too..the sketchbook paper works best)