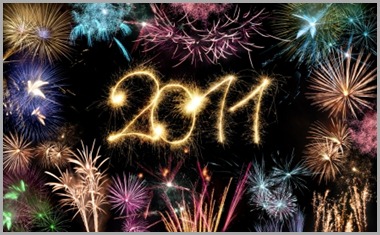 “Enthusiasm is excitement with inspiration, motivation, and a pinch of creativity.”

I love this picture up there, why you ask???  Well besides the fact that its pretty it also fits my 2011 theme. Lately one of my favorite songs is Firework by Katy Perry. I love the line’s where she sings:

For 2011 I want to “own the night”(and day for that matter) and shine. This year I will be turning 30 and I know I'm worth more than I have put into myself these past 29 years. I'm not really into making New Years resolutions because come on , really, who keeps them? 2011 is my year, starting 1/1/11 its time to put me 1st for a while which is something I have a hard time doing. I am a caretaker, I need to help people, but its time to help me.

Looking back on 2010 with the exception of the loss of my Father in June it really wasn’t to bad of a year. I decided to make some changes and I have stuck with them. I quit smoking, I have lost right at 30 lbs and kept it off and I was accepted and started school at UNC Greensboro. That’s some pretty good stuff if you ask me! The weight loss is  not quite where I had hoped it would be by this time but considering what happened in June I can be ok with the fact that I have only maintained the loss I already had from the first half of the year. I have stayed in the 190’s since all that happened and even though it is not a loss it is still progress. Before this year I know that after I lost my Father I would have surely had some gainage happen. (probably some significant gainage) So I can live with just maintaining, but now its time to get back to work!

2011 is going to be about owning who I am and being accountable. If there is something I don’t like, I’m going to work to change it for the better. I still want to keep my goal of doing a half marathon by my birthday (June 14th, feel free to send presents haha jk) even if I have to crawl across the finish line! This means I have 5 months to get it together and get ready for this,maybe less considering there aren't a ton of these around where I live. I also have decided that im going to have some fun while doing this!