This weekend has been an adventure so far! In case you didn’t know today was supposed to be the day I walked my half marathon. A few weeks back I decided to change that goal from “by my 30th birthday” to “during my 30th year”. With all the knee pain I have been having I just flat out was not ready, and very well could have seriously injured myself.

Last night I was talking to Kris and happened to look up North Carolina races to see when some 5K’s were coming up and where. Well it turned out that on my home turf there was a race Today. I told her I was seriously thinking about doing it, since after all today was the day I was supposed to do my half. She immediately responded with “DO IT!” and “you got this, you were training for a half… you can do a 5K no problem”. I said “But Kris it’s part on natural terrain!”.  She again said YOU GOT THIS BABE!”. So I thought about it for a while, we talked some more and I decided, you know what I do got this. I said ok, I’m going to do it! She was ecstatic, I was instantly nervous as could be. I wanted to do it but like actual people would see me, what if I tripped and broke an ankle on a root, what if I was last. It still sounded fun and you cant beat a $15 registration fee. Off to bed I went. 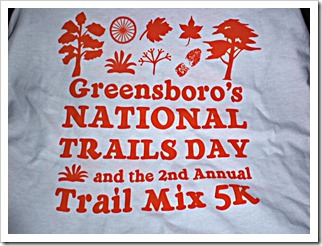 I woke up this morning a ball of nerves had my coffee and Off I went. The Race was at 8am, but registration started at 7am. I didn’t want to get stuck in a long line so I was there just before 7am. I was one of the first people there other than people setting up so no line for me. I had my first race bib and an awesome t-shirt in my hands and they told me I was going to be in the first heat. Crap, now I have an hour what do I do? I wandered around a bit, sat in my car and tweeted a bit and then decided to move my car to the upper parking lot. I had parked down at the bottom where the race started and just felt like I was in the way. After moving my car and walking back down to where the action was I ended up saying hi to a couple of the nicest people. The first one was waiting on her friends to go on a hike and the second one turned out to be a personal trainer.


After the hike lady wondered off with her friends I got to really talking to personal trainer lady. She told me it was awesome what I was doing. We chatted about diabetes, it turns out her step son was recently diagnosed. I told her I was in school to be a Registered Dietician and wanted to be a Certified Diabetes Educator and that I wrote a blog about all of it. She was just what I needed before the race started. She kept telling me how awesome it was what I was doing and before we knew it it was time for the pre-race info.
The Following is the thought process that next came into my head:

“Whaaaattt …can you repeat that! Most, not some, of the race is on natural terrain. Uh-oh! Ok well I’m here, no backing out. RaWRRRR. Oh crap, music, I need my music. S%&* left my ear buds in the car…no time to get them…crap my PDM for my pump is also in the car and I haven’t turned on my temporary basal yet…I’l just rip it off…well here goes nothing”

As I stood there contemplating what exactly I had gotten myself into I heard “OK heat one, LINE UP!”. I wanted to start off running, no one wants to be the dork who starts the race walking. Off I went! I actually managed to run about 5 minuets before I HAD to take it down to a walk. This was probably  not my best idea. I should have paced myself a bit more so that I didn’t tire out as fast. As I passed the spot where I would soon turn into the natural part I looked over at it quite frankly thought a few dirty words


I kept going made the turnaround and found myself entering the natural terrain. I really missed my Girl Talk I always listen to. This part was so much harder than I had imagined even. But, I kept going! Quickly I was being passed by. I kept going. Suddenly I realized I very well may be last. I kept going. I saw the bike police and firemen come up behind me and knew I was dead last. I knew I wasn’t going to win the race or even finish in the front, but last, this was not my plan. After a few moments when I checked my time once again I suddenly realized that even though being completely unprepared for a trail race, not a paved 5k, I was still at my usual pace. I could do this! Who cares If I’m last, most of the people in this were clearly experienced runners. My goal was to finish not to worry with a specific speed or time. I laughed thinking “OK, I have a police escort”. I also had been trying to prevent an oncoming low blood sugar for about half a mile at this point, so while I didn’t want them right behind me I was kinda glad they weren’t far…you know just in case.

Finally I passed some volunteers who told me I was in the home stretch. I thought, Thank God! With the dropping blood sugar I was trying to prevent I was really feeling the 2 or so miles I had already done. I checked once again and things seemed to be leveling off thankfully. I didn’t stop not once the entire time. I kept going. I finally saw the paved part again which meant the finish line was not far off. I kept going. I desperately wanted to run across the finish line but the damn thing was up yet another steep hill…So I kept walking. When I crossed that finish line I heard them say “58:36”. While I hated that I was last I was proud to have finished and I’m actually pretty happy with that time. To have never done natural trails this had been a huge challenge and I did it!


I did a Trail 5k! It felt great, ok it really felt exhausting, but the thought that I had done this felt great. Thank you to all of those who sent me good luck wishes and tweets this morning!