Ah …where to begin?

For those of you who have followed me and my progress you know all to well things just STOPPED in February. I got back into the work force and had to go train for a month out of town bringing things to a screeching halt, for the most part, in my healthiness journey.  I was thrown into the work version of MTV’s Real World stuck staying in a house with several other people I didn’t know. I “didn’t want to work out in front of people I didn’t know”, REALLY?!?!? What a lame excuse! Needless to say and very clear from my lack of post, things did  not pick back up once I got home.

While I haven't been working out I have at least still be somewhat watching what I ate. This thankfully has at least prevented me from gaining all the weight I lost back…and I have even lost 3lbs. Seriously though 3 pounds over 7.5 months is not progress to me but feels more like chance, or luck. Regardless though it was not a gain so I’ll take it!

While I have been trying to motivate to get back at it the excuses just kept pilling up along side the I’ll start tomorrow, next week, when xyz settles down …the list went on. Last weekend I had a reality check! Leave it to a candid picture, not posed or properly lighted with no makeup on and a bad hair did day to put things into perspective. I saw this picture and immediately thought “MAN AM I FILLING THAT CHAIR OUT!” 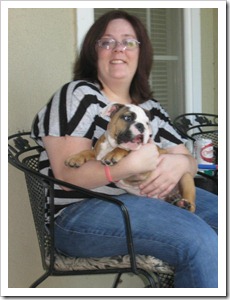 Now to be fare here’s a picture in the same outfit (standing up) with makeup and a proper hair did day. (LOL) 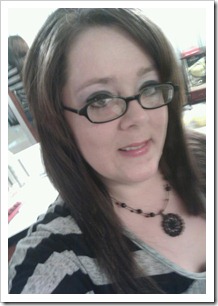 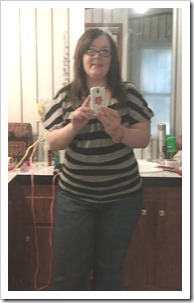 Anyways …with  no further adieu, this prompted me to hit the reset button. I called Monday and made an appointment with the weight loss clinic I went to back in December for Tuesday night after work. I started actually tracking again Monday as well and even managed to work out yesterday morning (and plan to this morning after I finish this post). My clinic visit went well, I had not gained and was still down 13 lbs from my December visit. Had I continued with the “plan” instead of coming to a halt in February though I very well could be at goal now. Ten of those thirteen pounds happened between my December visit and the end of January.

I also found a new “toy” last weekend though for the bargain price of $9.99, and we all know I LOVE a bargain. (this normally retails for around $60-70) 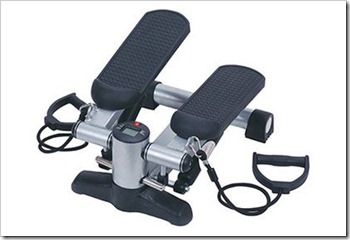 It may not be much but for  now its as close to gym equipment as I can get …at home anyways. I will also be pulling out the at home workout DVD’s.

My goals for  now are to

What have all of you been doing lately? Are you at goal, closer to goal, on track, off…

Join me and let’s get this party started again!!!!